Wisconsin cancelled its been kept quiet


Welfare-to-work plan killed off with nothing to replace it

Comes after lawmakers and NGOs persuade gov't that program too flawed to be expanded nationwide. 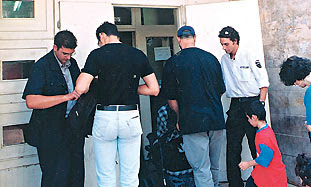 Photo: Ariel Jerozolimski
It was aimed to get thousands of people off unemployment benefits and back into the workplace when it kicked off some four years ago, but the Wisconsin Plan, Israel’s flagship employment program, looks set to close its doors this weekend after lawmakers and NGOs persuaded the government that the program was too flawed to be expanded nationwide.

MK Haim Katz, chair of the Knesset’s Labor, Welfare and Health Committee, which recommended scrapping the plan, said that it did not deserve any more time or even discussion.

While the merits or pitfalls of this obviously well-intentioned scheme can be debated for hours – most likely without reaching much conclusion – what needs to be asked following this turn of events is how much the debate over this program is reflective of the government’s failure to effectively tackle Israel’s growing poverty and what, if anything, is likely to come in its place?

According to research published earlier this year by the Taub Center for Social Policy Studies in Israel, the country is on an unsustainable long-term social and economic trajectory, with our leaders preferring to simply increase welfare payments instead of dealing with the root causes of poverty.

The center’s executive director, Dr. Dan Ben-David, an economics professor for the Department of Public Policy at Tel Aviv University, said that increasing welfare assistance is not sustainable in the long term.

“On one hand, we are lucky that Israel has been able to provide such a safety net,” Ben-David told The Jerusalem Post in s previous interview. “On the other hand, however, welfare assistance per capita in Israel has risen five-fold in the past four decades, while the average income has only doubled.”

Bearing this in mind, it is not clear why it was decided to disband a program actively seeking to prepare the unemployable for employment, and where this will leave thousands of people who want to better their lives instead of continuing to rely on diminishing welfare. What will the roughly 18,000 people currently participating in the Wisconsin Plan do on Sunday morning?

Oshrat Maimon, an attorney for the Association for Civil Rights in Israel (ACRI), which has been actively lobbying lawmakers for four years to cancel the program and whose legal petition was successful in ending it on Thursday, believes the majority of the programs participants will be happy that it’s over.

She said that an employment program run by for-profit companies is damaging and a severe infringement on people’s human rights.

“There are some things that need to stay in the hands of the government,” she says. “Welfare benefits are given out by the government and it is up to the government to decide whether someone should be entitled to them or not.

“The heart of the problem is that the Finance Ministry does not want to deal with welfare benefits any longer and is trying to outsource the responsibility to the private sector,” she said, adding that no amount of tweaking to the plan would have been able to counter that bold step.

However, while the criticism by Maimon and others who fought against the Wisconsin Plan might be convincing, there are now few alternatives for those who must return to standing in line to claim their welfare benefits at the National Employment Service.

Over the last two decades funding to the National Employment Service has been severely slashed and today, as it deals with nearly 400 clients per case worker, it acts merely as a conduit for people trying to make sure they receive some type of income. Little is invested in actively helping the unemployed find work.

Maimon argues that it makes little difference, because one of the main problems in Israel is that there are not enough jobs out there, especially for the chronically unemployed and the discriminated-against Arab sector – a fact, she said, the Wisconsin Plan failed to acknowledge.

According to Maimon, ACRI received many complaints from participants showing how those running the program would send people to work in inappropriate and low-paying jobs, just to get them off of welfare.

“People ended up getting part-time jobs for very low wages and would end up losing their benefits or having to spend hours at the centers doing nothing, just to get their income support,” Maimon said.

“The main problem with the government is that instead of focusing on improving the job market, all the emphasis for finding work is on the unemployed,” she said. “There is simply not enough work placements for people.”

So what are the other options? Maimon and those who called for the Wisconsin Plan’s end believe that the government should invest once again in the National Employment Service and give it the tools to help the more than 225,000 unemployed people find work.

“These private companies were given millions of shekels to run this program and if the Treasury just gives even half that money to the employment service they will be twice as effective,” she said.

Whether the National Employment Service will be able to reclaim its status after being sidelined for the past four years in favor of the Wisconsin Plan remains to be seen, but what is clear is that unless the government comes up with a viable welfare-to-work alternative and a plan for effectively tackling poverty, Ben David’s prediction of an unsustainable trajectory might end up proving itself.
Posted by The Anonymouse at 14:05